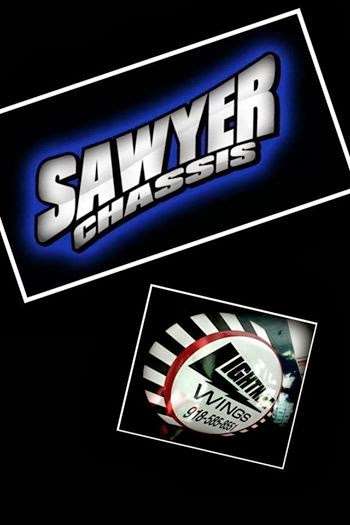 Southern Illinois Raceway is proud to announce its partnership with Sawyer Chassis and Lightning Wings to bring you the 2nd Annual Highbanks Hustle! Details were finalized this weekend during the Chili Bowl to work with both of these great companies to help bring you the baddest Wing Outlaw Micro Sprint race east of the Mississippi!

Sawyer Chassis was established in 1958 and has been producing winning micro sprint chassis for over 50 years! In recent years the development of the "626" chassis has brought Sawyer Chassis to the spotlight by winning 2 POWRi Championships and multiple big races including: the DRC Memorial, The 66, The Cornhusker Nationals, last year's Highbanks Hustle, Terry Sprague Memorial, and the Tulsa Shootout. For more information about Sawyer Chassis visit them at www.sawyerchassis.com or call Scott at 918-258-2944.

Lightning Wings is in the business of downforce and they are great at providing it for many different applications! Lightning produces wings of all varieties. So, no matter what size, what offset, internal or external slide, give Clarissa a call at (918) 585-8551 and she will take care of all of your down force needs! You can also check out their website atwww.lightningwings.com as well.

SIR can not thank Scott at Sawyer and Clarissa at Lightning for all of their support of the Highbanks Hustle! We hope everyone will join us June 19th-21st to crown the second Sawyer Chassis Highbanks Hustle Presented By Lightning Wings Champion! The winner will take home $5k and an awesome trophy!! Look for pre-entry forms very soon. Who is ready or June to be here already???

The following changes in restrictor rules will go into effect immediately:

The wing rules have essentially changed to “A Class” wing rules. This will put SIR in line with every other track in the Midwest that runs restrictors. Also, we feel this will unplant the cars and make for even more exciting racing!

How will the champion be crowned? This year the points chase will be different in the Boss Chassis Wing Outlaw class than it has been in the past. With 5 races left at the end of the year (August 23rd) the points will be reset for the drivers that have been present at at least 50% of the races (not to exceed 10 drivers). Those guys will then race it out for 5 races in the Boss Chassis Chase for the Chassis, with the high points guy getting the Boss Chassis Basic Chassis Kit.

SIR would like to thank Austin Brown and Boss Chassis for stepping up in such a big way to help make the 25th Anniversary season even more special! More information about Boss Chassis can be found at www.bosschassis.com or look up their Facebook page.

As announced last month the Southern Illinois Raceway will host two POWRi Speedway Motors National Micro Sprint series races in 2014, one of which will be the series’ championship night. The first race will take place on Saturday July 26th, the night after the famed series invades Wayne County Speedway just north in Wayne City, making for a weekend of micro racing on two different 1/8 mile tracks. This weekend will be reminiscent of the days when racers in Southern Illinois ran Wayne City on Friday and SIR on Saturday. The second date will be Saturday October 4th. This night will be the last night on the POWRi Micro Sprint schedule and the 2014 champion will be crowned! In addition, the 2014 SIR track champions will be honored that night with our season ending bon fire and weenie roast.

General admission for POWRi races will remain at $7 for adults, $3 for 7-12 years old, and free for 6 and under. Pit pass prices will be $30 both nights. Support classes for these two nights will be announced in the future. Southern Illinois Raceway could not be more excited to work with Kenny Brown and POWRi to bring you the best wing outlaw micro sprint racers in the Midwest!
Posted by Race3Champ at 7:50 PM